Introduction to the Maker Movement 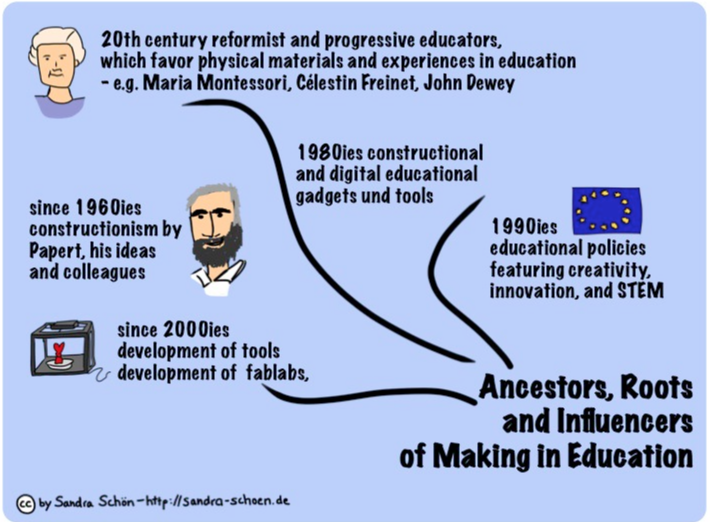 Historical Figures That Are Integral to the Maker Movement

Humans have been making and creating since the beginning of time. We would not be where we are without trial and error and those willing to spend their time inventing and sharing their creations. We do have those individuals in the educational community who were innovators themselves whose thinking and theories have contributed to what is now called the Maker Movement. As educators, you would have studied them during your early education courses.

Papert was among the first to recognize the revolutionary potential of computers in education. He came up with the idea of Logo, the first programming language for children.

In his book “Mindstorms: Children, Computers and Powerful Ideas” (1980), Papert argued against “the computer being used to program the child.” He presented an alternative approach in which “the child programs the computer and, in doing so, both acquires a sense of mastery over a piece of the most modern and powerful technology and establishes an intimate contact with some of the deepest ideas from science, from mathematics, and from the art of intellectual model building.” MIT News

Take a trip back memory lane and watch this video from 1986, with Papert demonstrating how children can easily program computers.

Today, the Lego Mindstorms have evolved and are still popular. We have many new resources that are available to encourage students to innovate and master their own learning. In this course, you will learn more about the resources available and the new movement that is keeping making and creating at the forefront.

The History of the Maker Movement

As was stated above making is not new but the term "maker" is. The Maker Movement began in 2005 after Dale Dougherty and his team coined the term maker to define people who enjoy "hands-on" work and play. It is a grassroots movement of hobbyists, inventors, students, engineers, and enthusiasts of making and creating.

Dougherty believes that the Maker Movement has the potential to transform the educational experience of students and introduce them to the practice of innovation through play and tinkering. If you go back and study our early education leaders like Maria Montessori and Seymour Papert, this is right in line with their thinking.

Dougherty and his term launched the MAKE: Magazine for the tech-influenced DIY community in 2005. To this day, the Make website is the go-to for everything Maker. Check out the wide array of projects. Read about modern-day makers and how they are making a difference in their community and possibly even the world! 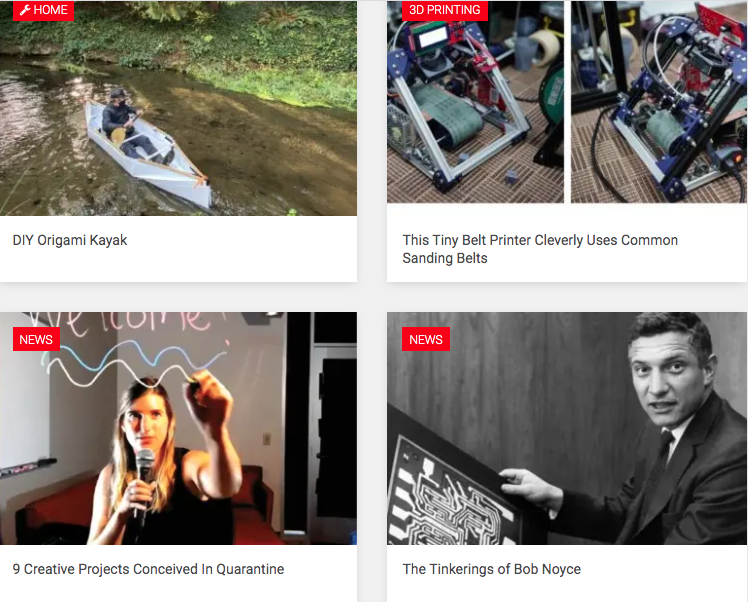 Anyone can become a maker. All you have to do is start making!

How Can You and Your Students Become Makers?

1. First, let's learn more about the Movement. Start by reading this short article by Dale Dougherty.

Dougherty says in the article "A century ago, psychologist and education reformer John Dewey extolled the virtues of learning by doing, and contemporary science of the brain confirms the importance of tac- tical engagement and of using our hands in the learning process. Kids today are disengaged and bored in school, and as a result, many see themselves as poor learners. We should be framing things in our schools not just in terms of “how do we test you on that?” but on “what can you do with what you know?”

2. Next, read this article on The Maker Movement: A Learning Revolution by Sylvia Martinez. In the article, you will be introduced to the tools that move our students from being passive receivers of knowledge to real-world makers.

In the article you will be introduced to Sylvia Martinez and Gary Stager who wrote the book Invent to Learn: Making, Tinkering and Engineering in the Classroom. The 2nd edition is now available. It is available to purchase in hardbound or on a Kindle device. We highly recommend you borrow or purchase this if you are interested in learning more in-depth about making in the classroom.

3. Check out the Classroom Makers page by the REMC Association. REMC Classroom Makers (#cmakers) provides local REMCs with maker training, curriculum, and materials to be used with their districts to support and expand curricula and learning. There is information on how to check out materials and there are a lot of tutorials and resources to support classrooms.

4. Finally, check out the 17 projects created by teachers to use with students. 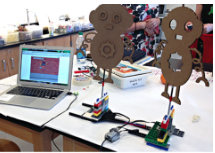 In the four steps above you have received a short introduction to the Maker Movement and looked at sample projects for the classroom.

In the next section, you will learn about resources that are available to purchase to use with your students in the classroom.

Move to Making and Creating

Addressing the ISTE Standards For Educators

​Learner
1a. Set professional learning goals to explore and apply pedagogical approaches made possible by technology and reflect on their effectiveness.
1c. Stay current with research that supports improved student learning outcomes, including findings from the learning sciences.

Leader
2b. Advocate for equitable access to educational technology, digital content and learning opportunities to meet the diverse needs of all students.
2c. Model for colleagues the identification, exploration,
evaluation, curation and adoption of
new digital resources and tools for learning.

Collaborator
4b. Collaborate and co-learn with students to discover and use new digital resources and diagnose and troubleshoot technology issues.

Facilitator
6a. Foster a culture where students take ownership of their learning goals and outcomes in both independent and group settings.
6b. Manage the use of technology and student learning strategies in digital platforms, virtual environments, hands-on makerspaces or in the field.
6c. Create learning opportunities that challenge students to use a design process and computational thinking to innovate and solve problems.
6d. Model and nurture creativity and creative expression to communicate ideas, knowledge or connections.