Ten Frame Mania: A Game’s Worth of Practice 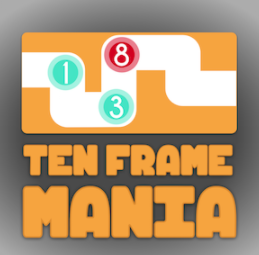 In this online game, Ten Frame Mania by Greg Tang, students make a given number in a digital ten frame to win the game for numbers up to 20. Thinking about numbers using frames of 10 can be a helpful way to learn basic number facts.
In addition, students can use benchmark numbers to count up or down to their desired number using the fill feature of the game.

To prepare for this lesson:

See Accommodations Page and Charts on the 21things4students.net site in the Teacher Resources.

Directions for this activity:

Different options for assessing the students:

Numbers and Operations in Base Ten

Kindergarten
Work with numbers 11-19 to gain foundations for place value.

CCSS.MATH.CONTENT.K.NBT.A.1
Compose and decompose numbers from 11 to 19 into ten ones and some further ones, e.g., by using objects or drawings, and record each composition or decomposition by a drawing or equation (such as 18 = 10 + 8); understand that these numbers are composed of ten ones and one, two, three, four, five, six, seven, eight, or nine ones.

Count to 120, starting at any number less than 120. In this range, read and write numerals and represent a number of objects with a written numeral.

Understand that the two digits of a two-digit number represent amounts of tens and ones. Understand the following as special cases:

Count forward beginning from a given number within the known sequence (instead of having to begin at 1).

CCSS.MATH.CONTENT.K.CC.A.3
Write numbers from 0 to 20. Represent a number of objects with a written numeral 0-20 (with 0 representing a count of no objects).

Count to tell the number of objects.

CCSS.MATH.CONTENT.K.CC.B.4
Understand the relationship between numbers and quantities; connect counting to cardinality.

CCSS.MATH.CONTENT.K.CC.B.4.C
Understand that each successive number name refers to a quantity that is one larger.

CCSS.MATH.CONTENT.K.CC.B.5
Count to answer "how many?" questions about as many as 20 things arranged in a line, a rectangular array, or a circle, or as many as 10 things in a scattered configuration; given a number from 1-20, count out that many objects.