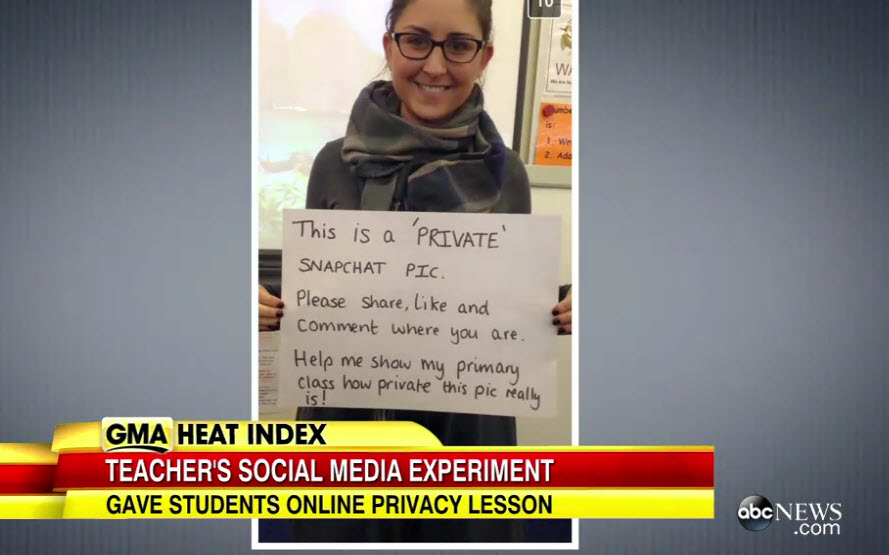 Sharing the wrong kind of information (through text, images, or video) can have long-term consequences for students and adults. Many newer social networks are using features that appeal to teens who believe their text and images are private or anonymous. While sites such as Snapchat (which posts pictures that supposedly disappear after a few seconds) can be a lot of fun to use and good for a laugh, it's more important than ever to understand that even on this kind of site, your online behavior can be traced. For example, complaints to the app developers about inappropriate behavior such as sexting and harassing behavior can be investigated and traced to the user who posted, while pictures that disappear can be saved by a screenshot done by the receiver.

Harassment: Harassment is online behavior that repeatedly annoys, bothers, or makes someone feel uncomfortable through the use of pictures, comments, or online video. Many states have enacted laws to make online harassment illegal.

Screengrab: Screengrab is taking a picture of your screen, also called a screenshot. (see Basics)

Viral: Viral is to spread rapidly via the Internet, email, or other media.

You can change the Quiz mode to Match, Test, Learn, Flash Cards, Spell using the selection list at the bottom right of the activity that says "Choose a Study Mode." Direct Link

1. Read the situation below and be prepared to take a stand. You and a partner may be asked to role-play this situation.

Scenario: Your younger sibling between the ages of 8-11 just received their first cell phone. Excited, they come to you and say "I want to download Snapchat and use it, but I don't want to tell Mom/Dad. Can you show me how to use it?"

Task: Decide whether or not it's a good idea for your younger sibling to have a Snapchat account. If you say yes, be prepared to defend your choice with recommended safeguards. If you say no, be prepared to give reasons explaining why you would not show a younger brother/sister how to use it.

2. Use the following resources to defend your decision:

3. Discuss what you have learned with classmates. If you are in a classroom setting, work with a partner and role-play the situation where one of you is the older sibling and the other the younger sibling.

Teen Voices: Friendships and Social Media Video from Commonsense Media - Many middle schoolers use social media to connect with friends, share pictures, and stay up to date. But, most aren't ready to handle the distractions that come with social media, or the pressures they feel to share constantly and always be connected. In this video, you can hear what other teens have to say about these issues and think critically about how social media affects their own relationships.

Do you Really Have a Private Life Online? YouTube

1. Empowered Learner
a. Articulate and set personal learning goals, develop strategies leveraging technology to achieve them, and reflect on the learning process itself to improve learning outcomes
c. Use technology to seek feedback that informs and improves their practice and to demonstrate their learning in a variety of ways
d. Understand the fundamental concepts of technology operations, demonstrate the ability to choose, use and troubleshoot current technologies, are able to transfer their knowledge to explore emerging technologies

2. Digital Citizen
a. Cultivate and manage their digital identity and reputation and are aware of the permanence of their actions in the digital world
b. Engage in positive, safe, legal and ethical behavior when using technology
c. Manage their personal data to maintain digital privacy and security