The video above is posted on YouTube. It describes the importance of being counted, and urges everyone to be counted in the 2020 census, that already happened. The direct link below will take you to the U.S. Census Bureau site to play the video from their page.

Direct link to video on U.S. Census Bureau, Statistics in Schools, "Getting an Accurate Count"

Students have access to lots of data that changes over time.  Understanding what this data tells us is important as it can help us make decisions about things like where we live, career choices, and the world around us.  In this Quest you will be learning about how data is collected about the state you live in as well as other states in the US; the increasing or decreasing populations in certain states; where most people live in the US; and how to interpret graphic representations of data that may inform things such as career choices.

Census: The official count or survey of a population.

Findings: A conclusion reached after examination or investigation.

Inference: An idea or conclusion about something from known facts (evidence) and reasoning. An inference is also called an "educated guess."

Line graph: A graph that uses one or more lines to show changes in statistics over time or space.

Statistics: The collection and classification of data that are in the form of numbers. An example: Statistics are commonly used with sports, such as "runs batted in" (RBI) that help us predict things such as how likely a batter is to get a hit.

You can change the Quiz mode from Match to: Test, Learn, Flash Cards, or Spell using the selection list at the bottom right of the activity that says "Choose a Study Mode." Direct Link

There are two options to complete this Quest.

Please check with your teacher about which option to use.

1. What is a census? Learn about the Census Bureau and how it is a leading go-to source of statistical information, and how it was created to address the U.S. Constitution.

2. If you live in the U.S. visit the U.S. census statistics:

3. Making inferences based on data is an important skill that is used in many different jobs.

Question: What changes do you observe about the median age of the population? How has it changed over the two time periods?

Check with your teacher to see if you can work with a partner or small group on the next activities.

You will apply some spreadsheet skills to create line, bar, or other graphs to observe the change in the number of births in three different U.S. states over the same four year period.

Direct link to this video

Play the Statistics in Schools Quiz to see if you can answer questions from the Census. The Quiz has questions such as: how many bedrooms are in an average U.S. house, how much candy an average American eats in one year, how do most people get to work, and more. 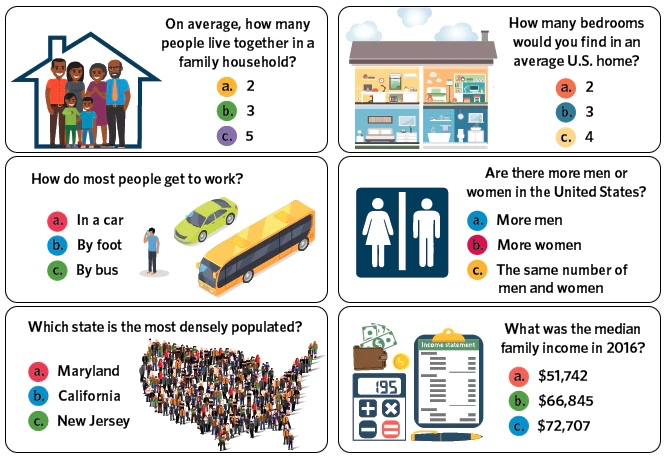 Compare the State Populations and see how well you do!

I have completed the Quests as assigned by my teacher.
Go to the Quest 10 Sort It Out

6. Creative Communicator
a. Students choose the appropriate platforms and tools for meeting the desired objectives of their creation or communication.
b. Students create original works or responsibly re-purpose or remix digital resources into new creations.
d. Students publish or present content that customizes the message and medium for a variety of audiences.